The goal of #Nanowrimo is, basically, to barf out an entire book in 30 days.

Nanowrimo forces you to push your literary muscles to their breaking point.

The goal is to FINISH, to untrain yourself ofÂ delay, obfuscations, and so-called #writer’s block.

The goal is to write the book you always said you would.

All Those Reasons to Stop

The first time out of the gate, I set downÂ 1890Â words in the first week or so– then fizzled out.Â Apparently, Thanksgiving and all of the shopping days between by son’s birthday and my twins’ birthday and Facebook fall in November. Excuses.

The second time I signed up, I was “prepared. I has a #writing buddy. I had Â a really good graspÂ of the novel I wanted to write. I outlined. I thought about the storyÂ a long time in advance. I bought software. I set down 11,000 words.

But then there was this strange Nano writing date at Panera in a mall. Something happened. Â I fizzled again.

Year 3: The year of the calamity.Â

I consider my previous experiences to be great warm-up Â to all the excuses any one person can handle.

I’ve exercised my writing muscle a lot more this year (writing regular pieces for the newspaper). There’s a lot less lag time between impulse to write and word count for the day.

But there’s always that nagging fear. What I’m concerned about?

The usual things, plus one. I have a life, work and a family, demands on my time and attention. Facebook. The usual. Nanowrimo is a pleasantly encouraging bedfellow, but doesn’t seem to give a flip about gymnastics and hockey and carpools.

The plus one is my mom’s leukemia and her terminal diagnosis. If there ever was a good excuses to hide in a hole and eat donuts, it’d be that.

But, I am taking the chance that writing “into” that space is the way to go. To not just try to avoid the obstacles… to write through them.

Advice from a (Former) Television Director

Back in my 20s I worked at the FOX station in Kansas City. Glamorous job of getting up early and helping to feed a major metropolitan area their fill of weather, traffic and morning news.

We had our share of “Breaking News” moments in those days: usually the more mundane water main breaks or apartment building fires. These were the salad days of pre-9/11 when the most wild thing that happened to Americans was a low-speed L.A. interstate chase, followed by the even more arduous “if-it-doesn’t-fit-you-must-acquit” OJ trial.

It should have been a dream job. I worked with lots of young people, my friends. It was prestigious and if I stayed on track and stayed ambitious, I could have gone on to work in news or sports at CNN, ESPN, NBC, or who knows where.

And I have friends who went on to do that. I am proud of their accomplishments and know how hard they worked to get where they are.

I didn’t. I absolutely despised the job. I left after a couple years.

The news of Boston is not our news. It’s a fallacy. I am not speaking about the sloppiness of 24-hour TV news coverage in this case (or many others).

I am talking about the impact of the coverage of these events on our psyches.

The way news anchors talk to us: it is personal. They look into your eyes. They use pictures and words that frighten us and seem to belong only to ourselves.

But that feeling of personal-ness is a lie. What is personal is happening right now, this moment, in your immediate life.

This is why I left TV news. Because the fire across town wasn’t my fire. The accident on I-35 didn’t have any meaning to me.

It wasn’t my tragedy. And I realized with growing anxiety that most news media producers, editors, and news directors had no idea how to filter that information appropriately: they didn’t know how (or feel it was necessary) to tell the story differently to the people who were nearby, rather than to those who were faraway and completely distant and out of control.

Learning the bad and horrible news of a faraway place in such immediate and grisly detail changes us. It stops us in the middle of our own days and slaps us with horror: “Look at this. This is a possibility for you!” — even if the event has no context to our own lives.

It creates the fear that has stopped us from sending our children outside to play.

By and large, the event in Boston has almost no impact on the majority of Americans. Most of us did not know anyone injured in the blast. We do not know either of the bombers. We may not even know a single person living in the Boston area. We have no way of controlling whether this can and will happen again, closer to home.

All we can do is be afraid, anxious, and unhappy.

If we choose to turn away, what could we do instead? Give our attention to our own friends and families, our own communities right in front of us. To the things that really DO need our attention.

Small (yes this is very small) events like this get BLOWN UP and out of proportion on our TVs and computer screens — in every version of itself, from video, to articles, to photos, to banners on Â Yankee stadium. When that happens, they become anotherÂ injuriousÂ nail firing from the pressure cooker.

Well, we all know that they did. We now live in a completely terror-obsessed society, in which the media — and the NEW media, ourselves on Facebook and Twitter — spend every second of our day poring over the details of events, sharing photos of suspects, sending condolences, stating our private prayers in public.

We are that frightened child going into a dark room, banging and making loud noises, to make sure all the imaginary monsters have gone away.

Having worked for many years in a business of feeding you sensationalized bad news in order to up our ratings, I have some advice to share. Here it is:

Shut up. Just be quiet.Â Try it, really. Sit still and look out the window. Feel free to observe the news if you need to, but stop talking about.

After all, that’s the advice we give to mothers, right? If a child falls and cries out, we tell a mother “don’t react.” The mother looks at the child in a heap underneath the monkey bars and she holds all her terrors inside, still and smiling but watchful. It’s the hardest choice but it is necessary. Because there is child, watching.

No reaction and up the child jumps, and off to something else.

Let’s stop reacting. With each reaction — from the media, from Twitter, from our ridiculous wasted time on Facebook — we heighten the power of those violent people who started out very small.Â We make them big with our noises.

So be quiet. Send your donations anonymously.Â Say your prayers in private. If prayers can be heard, they are heard without your shouting them onto Twitter.

And meanwhile, turn off the TV and RSS feed.

Have a good look out the window. It’s spring; the first robin has visited, your friends love you, the buds on the trees are ready to burst, and all the death of winter is behind us. … END_OF_DOCUMENT_TOKEN_TO_BE_REPLACED

—
I don’t think the woodpecker cared
That I strained but could not
Hear her
Over the wheel river of minivans
Flooding down the
Back road toward the
Little neighborhood school.
My girl and I stopped our walk
To spot the bird
At work
High up in the
Still-naked bough. We saw her
But could not hear
No, could not hear her,
Knock, knock knocking
On a branch
For her breakfast, no
Neither could we hear the
Diving chickadees or
The curdled call of the
Scurrying morning doves. … END_OF_DOCUMENT_TOKEN_TO_BE_REPLACED

I’ve been doing a far bit of writing and contributing at Writing Our Way Home, a writing community created by Fiona Robyn and Kaspalita. This is a wonderful place Â for poets, novelists, and any budding writer to find prompts, friendship, and support. I love it.

In the last few months I’ve had some featured blog posts, including:

We Want to Be Heard

Compassion Kitty, Who Are You?

Today I Said I Love You

I am grateful to Fiona and Kaspa for this generous community where I can share and contribute. … END_OF_DOCUMENT_TOKEN_TO_BE_REPLACED 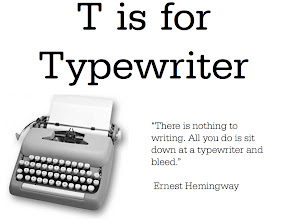 This Â October 2nd, I’ll be live at the original Harvest Festival in Stratford, CT for my third annual Demand Poetry appearance.

If you haven’t had the chance to experience Demand Poetry, this is a great way to see me in action.

When I do Demand Poetry live, I bring the Olivetti Lettera 33 out in public, to a beautiful spot like Paradise Green in Stratford.

Then strangers and friends alike request a poem from me on the spot. I ask them what they’d like a poem about, or who. We exchange a few ideas and I ask some questions. I take notes.

Then I send them off to browse at the fair.

I write the poem for them, edit it, then type the revised version.

All whilst surrounded by curious 8 year olds asking “What is that Mommy?” “Is that an old computer?”

Come to the green on October 2 and Demand a poem.

Bring the kids. They’ll be amazed.

I met an amazing women via Tara Gentile (natch) … Dyana Valentine. She popped up in a circle on Google+ last week and I followed her over to her video blog, a post called “You Will Survive.”

We are all nothing short of normal and boring, it is true– however, that flip side of that veritable life coin is that we are each, also, nothing short of a miracle. Our lives and and our talents, such as they are.

I love that I keep stumbling over such wonderful people like Dyana and Tara out here in the universe. Because over and over again I keep getting this belief affirmed.

Over there in the photo you can read the Demand Poem that Dyana ordered from me. Tomorrow she and I are going to chat about my process of writing it via Skype.

Meanwhile, you really should get to know Dyana, early morning wake-up call and all!

Here’s what she had to say in that first video post that grabbed me, which is way more worthy than anything I have to blather on about around here.

My essay on “Why I Make” went live today on American Craft’s blog.

I was so happy to write this piece, since I really believe that good writers need a “physical” outlet– something to give them the chance to get away from writing mentally.

I was super glad that some commenters and readers found it funny and related to it– this is my goal in writing many of my blog posts. Vivid writing that makes you laugh and gets you to look at the mundane in a new way.

My post is part of their series “Why I Make.” I submitted to them after I heard the prompt via their Facebook page, which I “like.” This is one great way to find writing opportunities, Â finding writing work in an area in which you:

I am grateful to Elizabeth Ryan at American Craft for spotting me in the email abyss. Every essay is another chance to flex those muscles. … END_OF_DOCUMENT_TOKEN_TO_BE_REPLACED